ninjabread wrote:In light of current politics, it's ironic how many signatories were illegal aliens who came to Texas after April 1830.

Hardly an apples-to-apples comparison. The Mexico Law of April 6, 1830 lasted less than three years at a time when the Mexican government was in an upheaval. And it tried to immediately stop immigration that was not only legally sanctioned, but monetarily encouraged.

Mexico went through at least five distinct phases dealing with Texan immigration, much of it self-legislated. And it all happened in a relative heartbeat: less than two decades from birth of the Mexican nation to Texas independence. So the analogy of slowing flow from a few countries into one that has had over 230 years of relatively consistent government and smooth, controlled transfers of power stops there.

And lest we forget, when the first real battles for Texas independence began, it wasn't just "incursionist" Anglos involved. Ergo the term "Texican": residents from Mexico and the United States were almost equal in ratio, shared the land, lived side by side, worked side by side, and fought side by side.

As a result of the Mexican National Colonization Law of 1824 and the Mexican federalists' success in suppressing the centralists in Mexico City resulting in the Constitution of 1824, Mexico pulled out (almost) all the stops in 1825 to try to attract large numbers of immigrants into the Coahuila/Texas region. Mexicans were to have first choice, but as incentive the government was essentially giving away what were, by today's standard, massive tracts of land: for a very small payment, you could get a league of pastureland (over 4,400 acres) plus a labor (177 acres) for cultivation.

The Mexican intent was to quickly populate the region with people committed to Mexico (the nation being freshly minted only a handful of years before) and who would act as a sort of buffer zone against the American Indian threat and the larger pressure from the United States. My family came here in 1828, into the then-controversial Nacogdoches area, during those rapid emigration days.

And the Law of April 6, 1830 lasted less than three years; the influx of immigrants from the north did slow to a crawl during that time...but the unrest among the then-residents--both Mexican and American--was seeded. At the beginning of 1833, Santa Anna led a coup and forcibly removed the centralists from the Mexican government and the federalists revoked the article in the Law of April 6, 1830 that slowed immigration from the United States, and the flow resumed.

The spring of 1834 to late 1835 was absolutely nuts in Mexico. Santa Ana decided he didn't like the federalists after all, repealed the Constitution of 1824, and instituted a new congress composed of...wait for it...centralists. It was much more difficult, given simple geography, for other areas of Mexico to rebel, but there were uprisings in some states like Zacatecas. A recently-minted nation that had fought for and won its independence from a recently renewed monarchy (Ferdinand VII) had gone from an intended republic almost overnight to an autocracy. Only the autocrats and those under their thumbs were happy about the developments.


As a proportion of the population, the active participation of Hispanic native and immigrant residents in the struggle for independence of Texas from Spain and Mexico was equal to or greater in specific battles than that of resident immigrants from the United States of the North.
--Wallace L. McKeehan

The term Tejano refers to Hispanics who were born in what would become, and is now Texas. Tejanos Jose Antonio Navarro and Lorenzo de Zavala risked their lives, and did so proudly, by signing the Texas Declaration of Independence on March 2, 1836. Many, many more Mexicans fought and died for an independent Texas.

A very long way of saying that I do not believe conservatives want, or that President Trump is espousing, a ban on immigration.

When my ancestors came to Texas in 1828, they had to pledge to the current Mexican constitution and affirm that they were Catholic. Even 189 years ago it wasn't acceptable for citizens of a different country to wander into yours and set up residence with no restrictions.

In most of Texas we share the land, live side by side, work side by side, love side by side, and share families side by side with people who may happen to have an ethnic origin in Mexico or Spain...or Nigeria or Sweden or Libya or China or Botswana or Iceland or, yes, Syria or Yemen or Iraq.

In celebration of Texas Independence Day, we should remember our roots and celebrate that diversity. If you enter our country legally, and remain legal, Texas loves you.

Saying that signatories to the Texas Declaration of Independence were illegal aliens is specious, disingenuous, divisive, and uninformed. 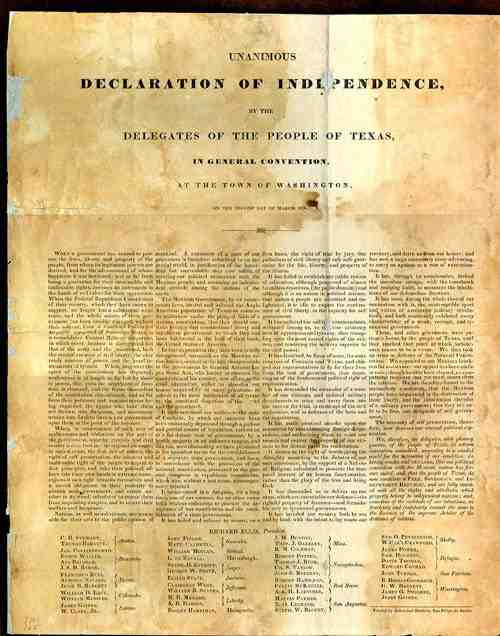