Return to “Today in Trump's 1st term as President”

I watched this last night, when it aired. I have started recording all of his shows, and listen to his radio, in the afternoon.
I like this guy he had on. He didn't say that global warming is not true, only that it is not as great a warming as the government sponsored models have it. He also put it into perspective with regard to past warming trends, that could not have had any bearing on human, causation.

I have it recorded but have not watched that episode yet. I listen to him every day on the way home and record his show every week.

It's funny how nobody want's to acknowledge the big bright thing in the sky. It goes through cycles the same as the planet and when the solar activity goes up, so does the temperature on this rock. When solar activity goes down, it gets colder, kind of like the cycle we are in right now. Notice the talking points went from global warming to climate change? The reason, its not getting warmer, its getting cooler. There are things mankind does that affects the environment no doubt but it's not to the degree the left wants you to believe. Climate change or global warming or whatever it will be called next is just another tool to try to take power from the people.

rotor wrote: ↑
Fri Oct 12, 2018 10:45 am
Finally something I can't agree with Trump about, increased ethanol in gasoline. Terrible stuff in gasoline.

More deep state exposed. You can hear it from the horse's mouth.

[sarcasm]I thought it was just the heads of the alphabet agencies that were corrupt. The career employed individuals are just working hard doing their jobs.[/sarcasm]

At least that's what they tell us. Apparently the swamp is deep.

At what point do the activities of these deep state operatives cross the line to insurrection?


Definition of Insurrection
: an act or instance of revolting against civil authority or an established government

I would say it already has.

The cash from the donor-funded groups goes toward the protesters’ post-and-forfeit payments — a small cash sum paid to resolve low-level misdemeanor crimes and avoid jail time.

More deep state exposed. You can hear it from the horse's mouth.

[sarcasm]I thought it was just the heads of the alphabet agencies that were corrupt. The career employed individuals are just working hard doing their jobs.[/sarcasm]

At least that's what they tell us. Apparently the swamp is deep.

Its gotten this bad.

I didn't know there was a white power symbol, its apparently the OK hand gesture.

Her husband defends her.

But Time and CBS both ran the story.

So I can't use the OK hand gesture anymore without being racist?

Apparently its a 4 chan hoax.

Apparently she was born in Mexico to Holocaust survivors. So would that make her a Jewish Mexican? I don't think the white supremacist will let her in their gang.

All the left has is hate.

If Trump wanted him gone, he would "resign". The back and forth is just enough to provide cover for what's really going on. I believe there are already hundreds of sealed indictments against crooks of all kinds, in and out of government. It will be a gold rush for defense lawyers.

But you are right - the appearance would be bad.

I sure hope you're right and if there are indictments, they need to come out before November.

This is buried in today's news cycle due to the Supreme Court nomination:

Trump signed the order granting clemency to 76-year-old Dwight Hammond and his son, Steven Hammond, 49, who were convicted of arson in 2012 for fires that burned on federal land in 2001 and 2006. Though they served their original sentences for the conviction -- Dwight serving three months, Steven serving one year -- an appellate judge ruled in 2015 that the terms were too short under federal minimum sentencing laws and the Hammonds were resentenced to serve the mandatory minimum.

I'm glad these 2 were granted clemency. I find it appalling that the government would file an appeal to make somebody go back to prison after their original time was served because somebody in the government thought the accused didn't serve long enough.

Trump gets a 2nd SCOTUS appointee.

I'm not tired of winning

The factory in Thailand is old news. They already have a factory in India. I think labor cost is the real reason, seeing as how this was in the works a long time.

Anyhow, they still have a factory in York, PA and can continue to make domestic market motorbikes in the USA. That would avoid US import tariffs. Then use lower cost foreign labor to manufacture for the rest of the world. It's a smart move from a business perspective, if bad news for union members.

It also has to do with the outrageous tarriffs India and some other countries charge to import Harleys into their countries. As mentioned above, this is old news.

It's also interesting how liberals think it's fine for other countries to charge outrageous tarrifs for USA imports but don't believe the tariffs should be reciprocal. Trump offered to eliminate all US import tariffs of the other countries would do the same. None of them took him up on it.

It's tariffs, shipping costs, overseas material costs, and the fact that Americans are not buying as many motorcycles as in years past. That's all motorcycles.

The one thing I've learned so far is Trump will run his mouth about something and then next thing you know, the right outcome is achieved. It is his tactic and how he gets things done. None of these tariffs have gone into effect, they are just be threatened and it would not surprise me at all for them to go away for US products as well as imported products. That would put US manufacturing on an even playing field with the world, (even except for foreign subsidies on steal) at least in regards to import tariffs.

bblhd672 wrote: ↑
Mon Jun 18, 2018 5:24 pm
This thread serves no useful function any longer except to divide forum members and cause ill will among us.

Sure, but it is kind of interesting and, if one wishes, easy to ignore. Too bad there has to be personal attacks and name calling though.

If it wasn't for the personal attacks and name calling from the sycophants, I wouldn't get much of a response at all.

Lying to the FBI?

Lying to the special council?

Which is why he shouldn't testify. They'll ask him a question about something he said 12 months ago, he won't quite remember and then the goons will say he lied.

Exactly what crime did the president commit that would warrant him to grant himself a pardon?

How about undo the ITAR rule changes that basically made a gunsmith classified as a firearm manufacturer and pay a $2500 tax?

Getting out of the Iran deal was a good one to undo.

I am not familiar with ITAR. Is this something that Trump promised to abolish or undo? Are you saying all gunsmiths fall under ITAR and have to pay the $2500 tax? When were the rules changed regarding gunsmiths? I am interested in learning more about this and how Trump can use his pen and phone to change it for the better.

If you change parts no. If you make a chip (machining work), yes.


Which is why the guidance issued by the DDTC, part of the U.S. Department of State, in July 2016 seemed to catch many folks by surprise. In one sweepingly confusing motion, DDTC seemed to rewrite the common understanding of what it meant to be a manufacturer of firearms parts.

I'm not certain if this was an executive order or just another alphabet agency making regulations without Congress but I can make a bet Obama had his fingers all in this. I've read the Trump administration is trying to fix it but it's his State Department, it can be fixed if he wanted it to. Full disclosure, I haven't heard Trump personally mention rolling this back.

Regardless, we need give control of regulations back to Congress and not the ABC agencies who require no vote and cannot be held accountable for their actions. Their actions are almost always against the tax paying citizens.

How about undo the ITAR rule changes that basically made a gunsmith classified as a firearm manufacturer and pay a $2500 tax?

Getting out of the Iran deal was a good one to undo. 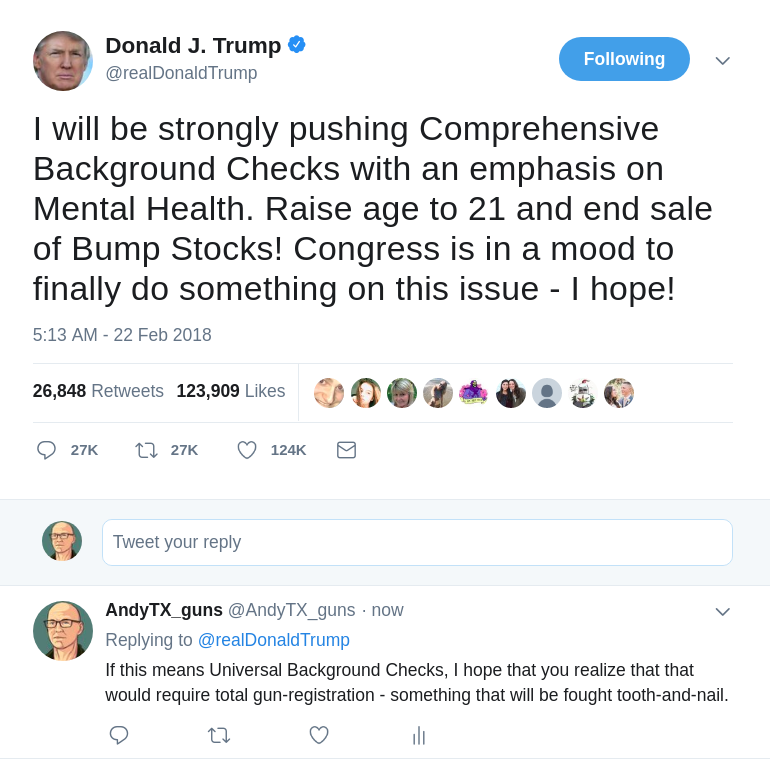 Is this part of a deal or Trump just caving? What will we give up after the next school shooting?
Search found 37 matches

Return to “Today in Trump's 1st term as President”