Reports of actual crimes and investigations, not hypothetical situations.


ROBINSON, Texas (KWTX) The FBI had what a law enforcement source described as a “considerable presence” late Thursday afternoon in a Robinson neighborhood where a local man died of a gunshot wound as agents arrived early in the morning to serve warrants, but the source says there was no standoff at the home.

The neighborhood in which the standoff occurred is the same one in which a teenage girl was found dead on June 6, 2018 of a self-inflicted gunshot wound.

Officers said at the time they found the 14-year-old girl with a gunshot wound to the chest behind a barn-like building that appeared to be under construction at a home in the 700 block of East Stegall.


This happened 2 or 3 houses down from one of my real good friends. He said there was a helicopter and plane overhead when it was all going down. Supposedly it happened around 7am but they didn't confirm the home owner was dead until around 3:30 pm.

This is the same house where the girl killed herself, not just in the neighborhood.

All the info I have is 3rd hand so I will not repeat any of what I heard because it can't be confirmed. I do know when I went to his house this afternoon to work on his boat, the feds had a tent and mobile command center set up in the road.
Top

After a day in the house, they found things that warranted the bomb squad coming back out?


ROBINSON, Texas (KWTX) The McLennan County Sheriff’s Office Bomb Squad returned Friday afternoon to a home in the 700 block of East Stegall Drive in Robinson where FBI agents shot a man who threatened to kill them as they arrived early Thursday morning to serve search and arrest warrants.

I was at my buddies house all afternoon and we saw several trucks with trailers going to the house which could have been the bomb squad. And one school bus. We have no idea why a school bus with no markings was there or why they had the flashers on like kids were about to get off while they were parked on a barricaded street.

They are being very tight lipped about what went down.
Top

When I hear Waco, all I can think of is fire and David Koresh. Bad situation for everyone that was involed.
One of my biggest mistakes in life...Is Believing people will show me the same love I've shown them.

narcissist wrote: ↑
Sat Jul 27, 2019 9:37 am
When I hear Waco, all I can think of is fire and David Koresh. Bad situation for everyone that was involed.

The government killed more people in that botched raid than were killed in the Sandy Hook, Parkland and Columbine school shootings combined.
This is my opinion. There are many like it, but this one is mine.

A real estate magazine I get every quarter from Texas A&M had a very detailed article on the dramatically increasing home prices in Waco.

The price rise started about 6 years ago.

They went into all the technical details.

The last paragraph however brought up the big elephant in the room: Chip and Joanna Gains the fixer upper HGTV cable couple, who to me, removed the David Koresch name from Waco and replaced it with theirs.
Top 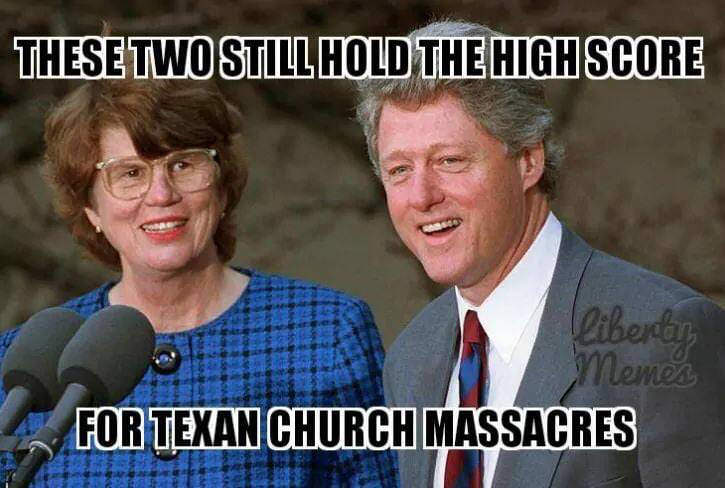 "The Second Amendment is absolute...If we refuse infringement to our Right to Keep and Bear Arms, as protected by the Second Amendment, we will never be burdened by tyranny, dictatorship, or subjugation - other than to bury those who attempt it. B.E.Wood
Top

FBI left about 6 this evening. Still no word why they were there.
Top

Chip and Joanna are causing everybody in central Texas's property values (hence taxes) to go up, not just Waco. Most people I talk to here wish they would just pack up and go somewhere else
Top
Post Reply
9 posts • Page 1 of 1

Return to “The Crime Blotter”