I rarely ever carry my RIA 1911A1, but decided to today. I had to make a stop at the post office to pick up a package, so while I was in my truck I took the 1911 out of the holster. I noticed that the safety was not on. I know it was on when I holstered it about a half hour earlier. When I put it back on I make triple sure the safety was on, but tonight it was off again when I got home. I unloaded it & looked to figure out the cause. It didn’t take long at all to realize that the thumb snap was pushing the safety down as the gun moved around in it. That’s slightly disconcerting. 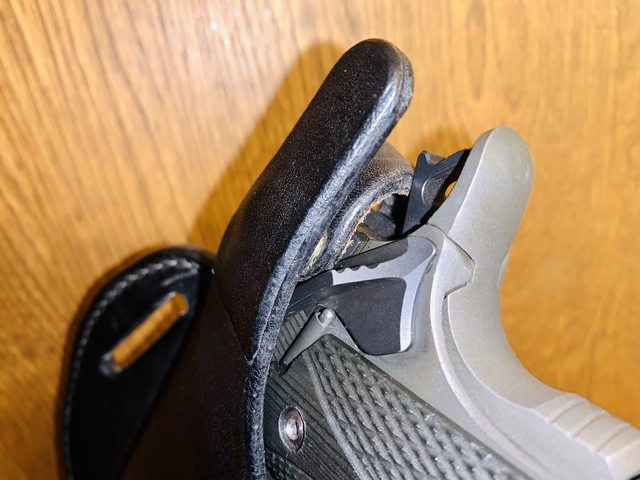 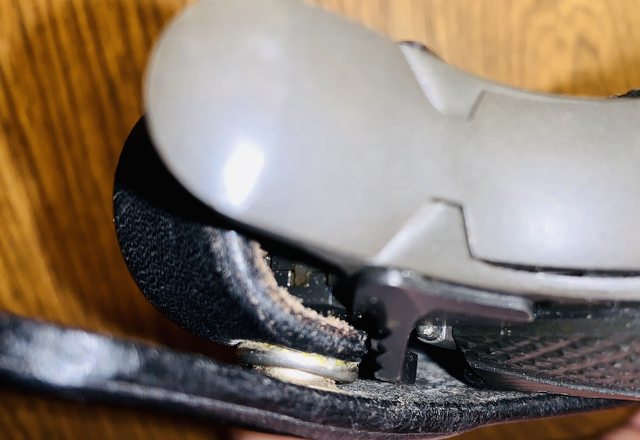 So, other than throwing the entire holster away, what can I do to it to prevent this from happening?
The only holster I have that I would feel safe carrying a 1911 in is a full-flap OD green M12

From what I can see, looks like one solution that may work would be to modify the length of the strap(s). That is, make the inner, or "loop" strap, longer so that the strap lays over the safety, instead of the end of the strap bumping and pushing down on the safety.

I had a similar problem with a Galco King Tuk leather/kydex hybrid IWB holster (similar to a Crossbreed Supertuck). The gun seemed like it fit snuggly into the holster, but after an hour or two of normal body movement, like you, I would notice that the safety was off. On mine, the leather sweatguard portion of the holster apparently was pushing the safety off (never figured out why it always pushed "off" rather than pushed "on.")

Personally, I finally went with a more conventional OWB leather holster (with sweatguard) and have not had any further problems. It's a nice, heavy duty stiff leather holster, molded to a 1911 frame. The mouth of the holster is still nice and stiff, even after several years of daily use. And, after a few weeks of using that holster, it developed a nice, deep, natural divot from the safety pressing into the leather. I consider that a great "feature!" I've never had a problem with the safety moving while using this holster.

And with it being molded, it has good natural retention. No, it does not have a strap for retention (or which would stop the hammer from falling). But, with good retention on the holster, and with at least 3 safeties (it's a series 80) on the gun, and the rarity of a catastrophic seer failure, I decided I could live without an external strap between the cocked hammer and the firing pin.

Anyway, good luck on finding a fix for your problem!

I have an answer that folks don’t like hearing... ditch the thumb strap. I carry 1911’s all the time without a thumbstrap, in fact I’ve never owned a holster with a thumbstrap, and retention has never been an issue.
Top

Yes, that is the pitfall of cheap Chinese knock-off holsters. The "locals" know 'murken 1911s so they pay attention and make the straps right. The imported knock-offs just aren't worth it, sorry. And the slop in the strap makes me even madder. There's no reason for my 1911 to be riding up-n-down 1/4" in my holster. It is a loaded weapon for crissake, it needs to be SECURE.
It is my belief that the cheap holster manufacturers assume that the correct way to carry a 1911 is hammer down with safety off. The length and angle of the strap suggests that heavily. But that's just my personal observation/opinion.

I agree that there should be no reason for a strap but then again, it is up to one's personal taste/preference whether they want a securing strap or not.
De gustibus non disputandum est.

Attaching a picture of a cheap FleaBay holster I originally got for my 1911.

I carry a Springfield 1911 Loaded model with ambi safety in a DM Bullard combat holster with sweat shield and have never had any issues. No need for a strap.
Top
Post Reply
5 posts • Page 1 of 1