For those of you who have made the switch. What do you carry?
Top

I will be watching this thread with interest. I have been wanting a Holosun green dot for G26.
Top

I am carrying a Smith n Wesson Shield Plus with a Holosun HS407K.

Sig P365X with Swampfox Sentinel, or P365XL with same. 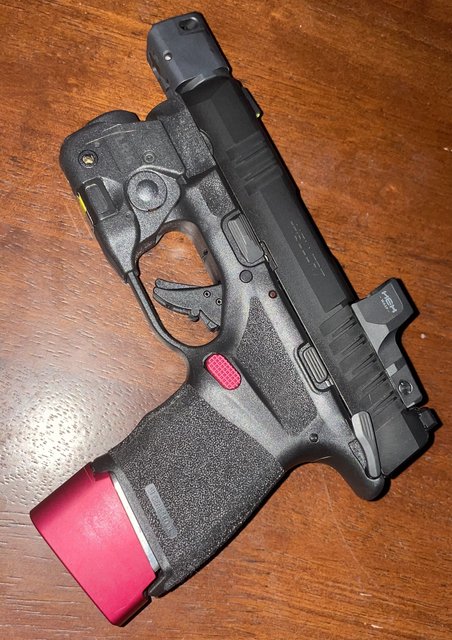 How do you like the hell cat? I’ve had the p365 and the P365XL neither fit my hand just right.
Top

Its not terrible, my primary carry is a sig938 with TLR but i wanted more capacity, the RDP announced the same week i was looking for something new so I grabbed one as soon as ordering went live.

I carry micros for comfort, got tired of walking around with 50oz 1911s, so i try to force myself to be okay with uncomfortable micros as long as I can shoot them accurately.
Top

That holosun is what I’ve been eyeing. Would you recommend the delta point over the holosun
Top

Been really eyeing / thinking about the Sig optics as the thin walls make for a great sight picture, probably on a milled G43 or a new release pre-milled. Seen a few guys with that set up and it conceals really well.
Top

Been really eyeing / thinking about the Sig optics as the thin walls make for a great sight picture, probably on a milled G43 or a new release pre-milled. Seen a few guys with that set up and it conceals really well.

I did carry this G45 but it was just too big for me. But it’s great.

That holosun is what I’ve been eyeing. Would you recommend the delta point over the holosun

No, but I have to qualify that answer. I like using the 507K so much that, as noted above, it's on my EDC. The reason for that is covered in my post of Dec. 9, 2020 copied below.
The DeltaPoint Pro is a proven site that has at least as good a reliability track record as any Trigicon and arguably better. (This is based upon the Sage Dynamic testing of numerous RDS over several years.) The Holosun sights, especially the 407/507K are relatively new. I would never have considered the 507K had it not been for Sage Dynamic testing of the 507K. My wife has a 507K on her EDC, a CZ P-01; that's how much I trust it.

Of note is the fact that Leupold stopped manufacturing the DPP with the 7 MOA triangle reticle. That was the only reason I chose it and I think dropping it from the product offering was a big mistake, at least in my view.

I finally got to the range a few days ago to test my 507K with the circle/dot reticle. I had previously sighted it in using only the 2 MOA dot. The circle is 32 MOA which is 16" at 50 yds, 8" at 25 yds and 4" at 12.5 yds. My theory was that I should be able to put the circle on the upper chest of an IDPA target at any distance out to at least 25 yds and all rounds would land inside the 8" 0-down ring on the target. My theory was correct, but that's only part of the story. The sight is fast, amazingly fast! Our monthly IDPA match Saturday, Nov. 28th was rained out, so I didn't get a chance to test the reticle further under match conditions. I suspect my times and points-down will be significantly lower.

I must confess that I thought the circle or circle/dot reticles would be pretty much useless on a handgun. I'm happy to be wrong. For people unfamiliar with IDPA targets, the 0-down ring on the target is in the upper chest in an area that contains the vitals that would most likely end a deadly threat. (Click on the target to see a larger version.) Being able to rapidly put rounds in the 0-down ring at virtually any reasonable pistol distance is not only a major benefit in a match, it might mean the difference between going home or going to the morgue if you face a deadly assault.

I plan to test this theory at 50 yds where the circle will be 16". That's still 2" less than the industry standard of 18" shoulder-to-shoulder for an average man. The vertical mark at 12 o'clock should make lateral alignment easier as you can simply align it under the head. It obviously won't work at 100 yds. but a pistol fight at that distance is highly unlikely. 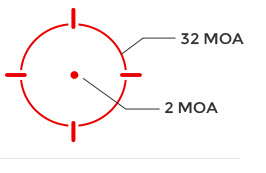