I thought I would start out this thread by giving a short review on a 1911 that most probably haven't heard about. Please add your either unusual or mostly unknown gun if you want... Not many get to see these types in the hands of regular people.

A few weeks back there was an advertisement on gun.deals.com for a Girsan 1911 with Red Dot sights.... I liked how the gun looked and love red dots but had never seen one on a 1911 frame.. So at $499.00 I took the chance on it... First let me say that I am a fan of Turkish firearms, owning 3 Canik's and a Tristar... I've been super please with all of them...

The Girsan is also of Turkish decent so I hoped that my luck would hold out.... So far I'm pleased.

Many would probably compare the Girsan to the likes of the Rock Island 1911's. Owning both of them I can honestly agree... Parts seem to be made well, and fit together nicely with no milling marks. Slide is tight and action smooth.... The trigger broke clean with hardly any travel or slop.. As to be expected in the 1911 models... After zeroing in the red dot I found the accuracy very acceptable at 7 yards and within 2.5 inches. The red dot that comes with the gun is on the cheap side though... It does have varying levels of brightness and the lens is clear.. However the dot is not the crispest I've seen.. I own a Vortex Venom on my Canik SFX and the difference is very noticeable. But again the red dot serves it purpose well enough.... I may decide to upgrade in the future.... Grips... Standard plastic grips... They worked fine, but again will most defiantly upgrade those as well to something better.

The gun arrived in a hard plastic case along with the standard lock, manual, cleaning brush and 1 magazine. It was pretty oily inside and out so I broke it down and gave it a good cleaning up... It was obvious that the gun had been test fired from the factory before sending out as there was slight residue in the barrel and action... Safety is Ambi which is plus in my books as I am left handed.

Range... After about 7 or 8 rounds to zero in the red dot, I sent 50 rounds downrange with zero malfunctions.. The gun ejected the brass high and straight out on every round. Shooting was done with Blazer Brass ammo. Overall I am very pleased with my purchase for a sub $500.00 gun... I would recommend for anyone who is interested in something a little different in that price range...

I have at least one gun that fits the "not well known" category. That is my Calico M950. The cylindrical magazine that sits atop the gun holds either 50 or 100 rounds (I have both), and the shells eject straight down through the chute that looks a bit like a magwell. The controls feel very much like an AK-47 and the gun is remarkably accurate.

Unfortunately, it's not super practical since it is too big to easily conceal, and you need to wind a spring at the back of the magazine before using. It is advised not to keep tension on that spring continuously, so that limits the guns practical value as a HD or car gun. Mine also has a slight issue with occasional "doubling". I suspect this is the result of a worn sear. Anyway, I don't have a pic handy, but this site has a stock photo and a bit more background on the weapon.

The above link is a friend bringing Hickok45 3 firearms to shoot with which he is uncomfortable.

It's 15 minutes long, so here's the spoiler alert: gold 1911, .25 auto mini pistol, and a very complicated Glock with folding stock.

The .25 is so short that if you index your finger along the slide, you will risk shooting the end of your finger off!

Of course Hickok45 admits that he is 6 foot, 8 inches tall, so his fingers are probably longer than most men.

It's amazing that he can take these guns he's never seen before, and hardly misses with any of his shots.

Most people are familiar with the CZ 75 these days, but there was a time when they weren't permitted in the US at all due to an arms embargo on Communist countries. I was fortunate to be exposed to many of these in South Africa, starting with my dad buying one of the first in late 1977. I have to say that it was pretty interesting to read American gun-writers praise and drool over a pistol they couldn't get - while we were drooling over everyday American pistols WE couldn't get due to a U.N. arms embargo.

Nowadays there are many variants, but the originals were straightforward DA/SA and the B-series is probably the most familiar to US folks - a roll-pin driven horizontally through the front-sight, a ring-hammer, internal firing pin safety and flattened/serrated trigger guard. Before that model there was the "Pre-B" - but there were actually 2 versions, not just a single Pre-B.

The first had a rounded trigger-guard, small swaged front-sight, narrowed slide profile and short frame-rails (hence it's colloquially-known as the "short-rail" model, sometimes the "A" model). Due to reports of frames eventually cracking under heavy use where the short rails meet the slide, both slide and frame were beefed-up in the 2nd model (commonly known as the Pre-B or Transitional model). It wasn't totally unheard-of for the swaged front-sight to finally break and disappear on well-used pistols (I had one fly off during an IPSC match myself).

I was fortunate to acquire a 1978 short-rail model a little while back, which is pictured below. Sadly the barrel was a sewer-pipe so I bought a new barrel and, after TAM's son did some excellent machining on the outside of the barrel (current barrels have a lot of extra meat on the outside and won't fit inside the short-rail's narrower slide), I was able to fit it to the slide where it now resides. As I age, the tiny sights are a pain but I daren't fit something like Novak sights to this - still, they're good enough to make headshots with boring reliability on B-26 targets at 25 yards.

Short-rail on top, current Model B below: 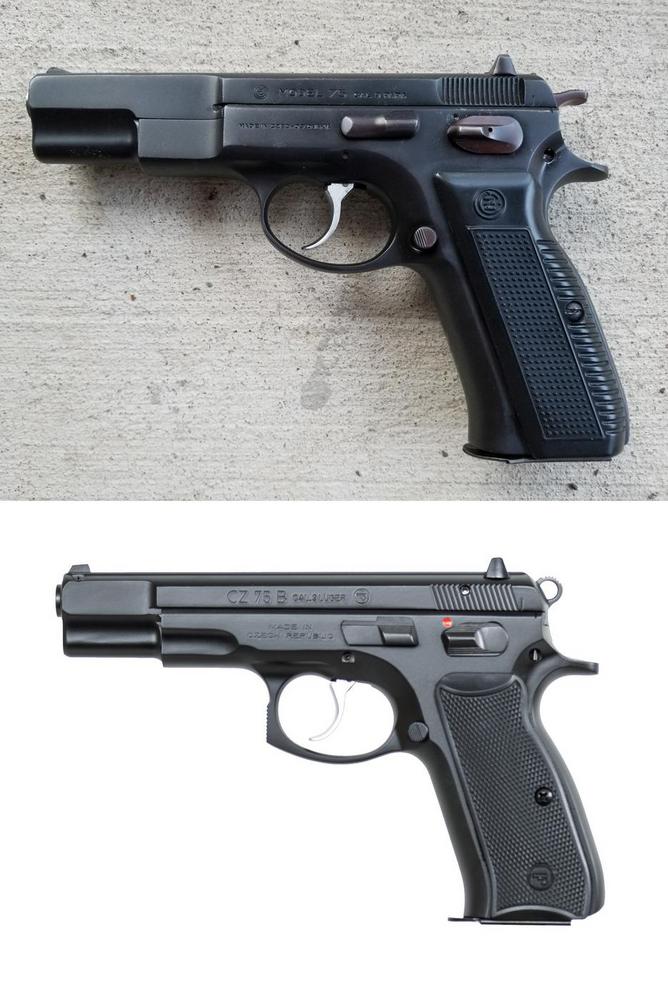 The above link is a friend bringing Hickok45 3 firearms to shoot with which he is uncomfortable.

It's 15 minutes long, so here's the spoiler alert: gold 1911, .25 auto mini pistol, and a very complicated Glock with folding stock.

The .25 is so short that if you index your finger along the slide, you will risk shooting the end of your finger off!

Of course Hickok45 admits that he is 6 foot, 8 inches tall, so his fingers are probably longer than most men.

It's amazing that he can take these guns he's never seen before, and hardly misses with any of his shots.

That "friend" is Matt Carriker, the owner if the "Demolition Ranch", "Off the Ranch", and "Vet Ranch" YouTube channels.
Give me Liberty, or I'll get up and get it myself.—Hookalakah Meshobbab
I don't carry because of the odds, I carry because of the stakes.—The Annoyed Boy
My dream is to have lived my life so well that future generations of leftists will demand my name be removed from buildings.
Top

I am always on the look out for less than everyday variety and brand guns. I have several, some from well known manufacturers and some from lesser know. IE SIG 232, a couple of Stars, a Sarsilmas CZ75 C clone sold by Academy as the Hancer 2000, an Astra and some others I can't recall offhand. The Sarsilmaz is a very nice pistol, soots well, accurate and was quite inexpensive. My Star BM is also a favorite. I have a couple of Charles Daly pistols as well, but CD was only an importer so one can buy their High Power clone and get one from any of the several manfacturers they used. In fact some HP's were made by two different factories, one being Dan Wesson.
Last edited by puma guy on Sun May 26, 2019 3:18 pm, edited 1 time in total.
KAHR PM40/Hoffner IWB and S&W Mod 60/ Galco IWB
NRA Endowment Member, TSRA Life Member,100 Club Life Member,TFC Member
My Faith, My Gun and My Constitution: I cling to all three!
Top

I would never deign to own a firearm that was not solidly mainstream, just Ask my friend AndyC.
Top

My first handgun was a Ruger Security-Six .357 bought in '75. Then in '76 I saw this and for some reason decided to buy it, for $89. Problem was that it fired 9mm Largo, which at the time was difficult to find. That dealer had some on hand so I didn't even think about availability. After some years of not finding ammo, I found a gunsmith who said he could modify it for 9mm Parabellum, which he did. Works fine. Never had a FtF or FtE. Problem is that I ruined any collector value it had. I see them now for $150 to $650.

It's a blow back design so after 25 or so rounds I've had enough of it. 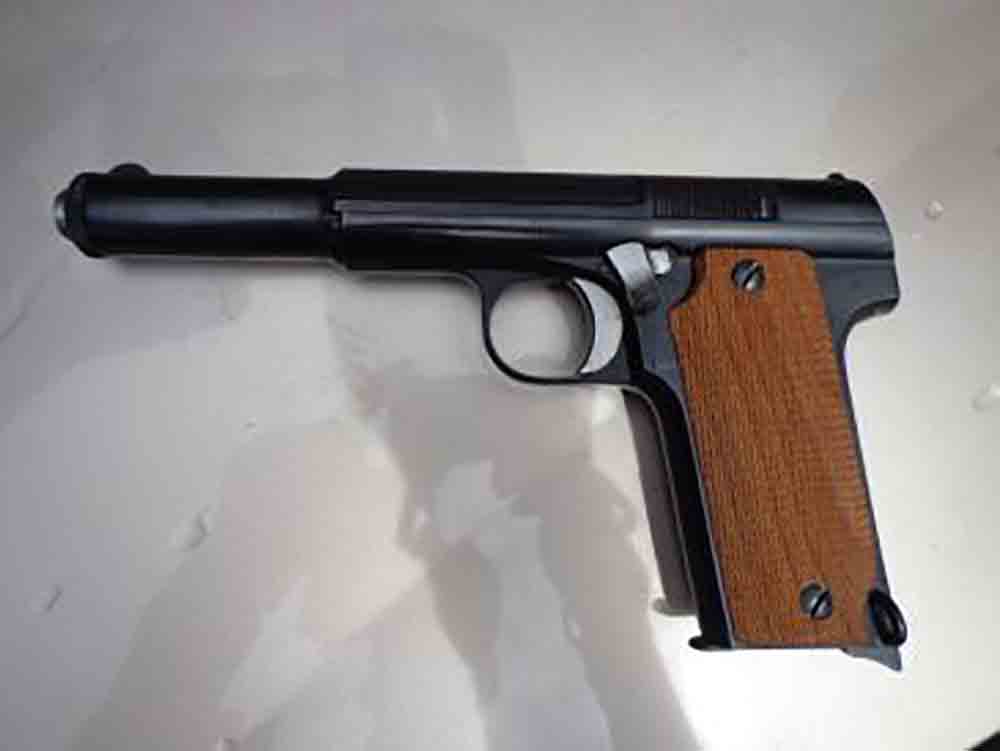 We received a shipment of Astras back in the 60's and 70's when I was selling guns. I can't recall for sure if they were the 600, but I believe they were since we had ammo (9mm Parabellum) for them and I know didn't carry 9mm Largo. The pistols we received were obviously surplus, but were in good to very good condition. We jokingly called them ray-guns. I wouldn't mind running across one now, but of course the prices are far removed from 50 years ago, which was about $35 bucks!