Hey, I take offense to that!

Though only one reasonable solution, right? ;)
Just PLEASE don't tell my wife I've been looking at Kimbers. Hopefully I can convince her yet again that it is "for safety".

I live in an rv for now. I have approx 20 firearms, combination of handguns and long guns. I just purchased my first 1911. It is an American Classic II government in hard chrome. I took it to the range and noticed the slide moves a little later than my other semis. It has a noticeable hit as it hits the limits of the slide. It is not as hard as my xd45. I am looking for a good owb holster. I purchased it because I wanted to add a 1911 to my collection.
Top

JRG, if you're still weighing different models, there are several good ways to go. The Rock Island Armory and Metro Arms 1911s get great reviews and most likely represent the best affordable quality. I took a Remington R1 in trade that is really nice, including a high luster finish if you prefer a 1911 in blue steel.

Another note on the Remington's, if you're wondering what happened to Para-Ordnance, they moved to Alabama just before Remington bought them.

In terms of build and options, the Ruger SR 1911 is a very solid choice for several reasons. Some die-hard 1911 fans might scoff at the frame being investment cast. On that note I can say that the only breakage I've witnessed firsthand was a plunger tube break. It's staked on. One thing Ruger did in considering that particular part, they decided to cast the tube integral to the frame. As far as investment cast vs forged frames, Ed Brown addressed that some years back. We have 1911 frames in aluminum alloy and scandium, it's simply not critical to have a forged steel frame.

If you handload and have come to terms with the capacity limitation of a single-stack 1911, the SR 1911 is also available in 10mm. As a handloader you can load down to .40 S&W performance levels while having the more powerful 10mm option when you need it. As far as gun games, 170 PF loads to get you a little bit of cushion over the 165 PF required; a 170 gr hard-cast or polycoated bullet at 1000 FPS puts you right on it.

Some 1911 guys might consider it heresy to recommend a caliber other than .45 ACP, which is a great cartridge. It is however, a 19,900 CUP/21,000 PSI cartridge and will require a good bit of modification to get it up to the potential of the 10mm. Not a big issue for some who want to match 10mm power with say, the .45 Super or the .460 Cor-Bon that bottlenecks the .45 case to use a 10mm bullet. Handloading the 10mm still has the advantage in regard to loading a bottel-necked case, where each case will need to be lubed, or in trying to get .45 Super Handload data.

As far as the NooB thing, what could say more about being a noob than a guy that shows up on the range with a $1500+ 1911 and only loads his magazines with factory ammo, LOL!

The pistol AndyC just listed on here would be a great first 1911!
Top

1911 - is the original design adopted by the military in 1911.
1911A1 - was adopted by the military in 1924.
1911 Series 70 - released by Colt in 1970.
1911 Series 80 - released by Colt in 1983.
Give me Liberty, or I'll get up and get it myself.—Hookalakah Meshobbab
I don't carry because of the odds, I carry because of the stakes.—The Annoyed Boy
My dream is to have lived my life so well that future generations of leftists will demand my name be removed from buildings.
Top

Ahh! Wow I actually was unaware. I was under the impression the series 70 was the original design and really didn’t know the number coincided with the year!
Good to know.

Did any of the internals change from the A1 to the series 70?
Top

The reference to firing pin block as series 80 is partially correct but in that regard its an 80 or a pre series 80. The real 70 series has a collet bushing only applied to full size Colt 1911's. Although makers now use 70/80 to define the firing pin block or lack thereof.


ETA: Kind of like in Kimber speak it a series II (with a Schwartz style FP block) or a pre series II. The originals were never referred to or called series I until they after they had a series II.
Top

Just curious, does the firing pin block really make that much of a difference? I mostly shoot, DA/SA Handguns and they all have firing pin blocks. Definitely not 1911 quality triggers. I know a lot of shooters don't like 80 series, but I am wondering just how much of a difference it really makes.
Liberty''s Blog
"Today, we need a nation of Minutemen, citizens who are not only prepared to take arms, but citizens who regard the preservation of freedom as the basic purpose of their daily life and who are willing to consciously work and sacrifice for that freedom." John F. Kennedy
Top

Nope, it doesn't make much difference. 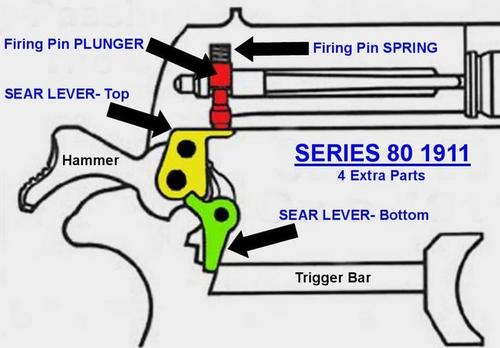 I don't like the Series 80 system myself, but that's more because 1) I've seen one of those extra parts break sometimes and not because "it makes the trigger-pull worse" as some claim and 2) I don't like added complexity simply to appease lawyers (no offense, Charles).

For example, I currently have a Colt 1911 for sale in the Firearms section which is a Series 80 design. I removed those parts (kept them, of course) and installed a heavy-duty FP spring instead to accomplish the same intent (to drop-safe the pistol) - but I did test-fire the pistol first with the Series 80 FP-safety parts in place and the trigger-pull was just fine, even to my well-seasoned 1911 finger.
Remember Kitty Genovese

Only 1 of my 1911's had the 80 parts my Para P14 I never liked the trigger in it BUT when I removed all of them now it has about the best trigger on the 6 I have, just my preference there, if I went back to carrying any of them I would have to do some trigger work to them as they are to light for my preference to carry 2-3/4 to 3 lbs each. The P14 may be lighter. My favorite handguns to shoot bar none. They do get weekly range and match time all year long, more recently.

If I ever got another one it probably would be Ruger but doubt that would happen. Got my bases covered there. My STI get more rounds than any.

If you ever see a STI Trogan give it a very serious look at no longer made but a few around, mine shoots as well and any I own including my Wilson, Clark or others. Also lifetime warranty.
Stay Safe
Top

I have owned a Kimber with their firing pin block, and I currently own a Springfield Loaded—which is an upgraded 1911A1. No, I wasn’t able to tell the difference in the trigger feel. Springfield solved the problem of drop safety by using a stronger firing pin spring, paired with a titanium firing pin. The lighter firing pin does not have enough mass to overcome the spring if the gun is dropped.
Give me Liberty, or I'll get up and get it myself.—Hookalakah Meshobbab
I don't carry because of the odds, I carry because of the stakes.—The Annoyed Boy
My dream is to have lived my life so well that future generations of leftists will demand my name be removed from buildings.
Top

Wow! Again let me say, Wow! You guys are a wealth of information. Thanks so much and keep it coming!

I bought a Rock Island Armory 1911A1 GI model just because I wanted the classic 1911 style and it has quickly become one of my favorite firearms. It was relatively inexpensive, it's incredibly accurate and it looks darn good in my tanker holster out on the ranch.

I have owned a Kimber with their firing pin block, and I currently own a Springfield Loaded—which is an upgraded 1911A1. No, I wasn’t able to tell the difference in the trigger feel. Springfield solved the problem of drop safety by using a stronger firing pin spring, paired with a titanium firing pin. The lighter firing pin does not have enough mass to overcome the spring if the gun is dropped.

The Kimber firing pin block is deactivated by the grip safety, not the trigger.
Facts are stubborn things; and whatever may be our wishes, our inclinations, or the dictates of our passions, they cannot alter the state of facts and evidence. - John Adams