I want to keep my guns.

CHL discussions that do not fit into more specific topics

TheFriscoKid wrote:Here's the thing - the changes coming are going to happen regardless of what we debate and divide upon.

I've spent $3000 on G&A since Valentine's day in anticipation of those changes.

One thing I find astonishing within this thread is those that bury their heads in the sand and label others as trolls or liberal gun grabbers instead of staying focused on the topic or confronting ideas, opinions and facts they don't agree with.

Many of these same people are the brave 'fight to their death cold dead hands' advocates that become cowards at the mere whisper of an idea that confronts their current perceptions.

This forum would benefit - we would benefit - from having more liberals and democrats and anti-gun people come in and have respectful considerate discussions not with the expectation that either side will change the others mind but from the benefit of understanding the other side and then being able to create strategies and compromises that allow us to keep our guns and allow the majority of Americans to feel safe again.

I believe a good guy with a gun is the only thing stops a bad guy with a gun. But that doesn't address the root cause. What we need to do is try to prevent the number of bad guys with guns before they even have a chance to kill 10 or 20 or 50.

Here's the issue- we have a fundamental difference of philosophy. Progressive/Liberal philosophy operates under the belief that human "failure" is the result of asymmetrical social status, socio-economic disparity and social injustice. Conservative philosophy states that individuals are solely responsible for their choices and the subsequent consequences, and this applies to everything from social-escalation and education to moral choices. Honestly, I'm a moderate conservative, recognizing that broken people may be forced into situation they are not emotionally or intellectually capable of handling.

Directly addressing the bolded areas I quoted- about 25 years ago, our Democratic/Progressive bretheren soundly struck down the establishment of a national database containing information on those institutionalized, or criminally charged, on the basis of mental-health defect. Every single time this issue is raised, the response has been that it is discriminatory, unethical, and un-Constitutional.

The argument is only tangentially about firearms. Progressives want totalitarian control. They do not trust individuals with fundamental rights of self-determination. E.g., if you try to kill me, I should not be capable of defending myself because at some point, I might decide to hurt someone. The logical fallacy is self-evident.

If we want to stop bad guys, we enforce the laws we have in place. Establish a national MH database. It should be empiracally-evidentially based ( a whooole other discussion effecting the validity of the DSM). Punishment for violent crime should be swift, sure, and consistent. This is not a new concept (Beccaria). It works. "Rehabilitation," does not.

I disagree with Beccaria's position on capital punishment, as maintaining suitable living conditions for long-term incarceration is unduly burdensome to the victims of criminals, who operate within the functioning society. Be that as it may...
Top 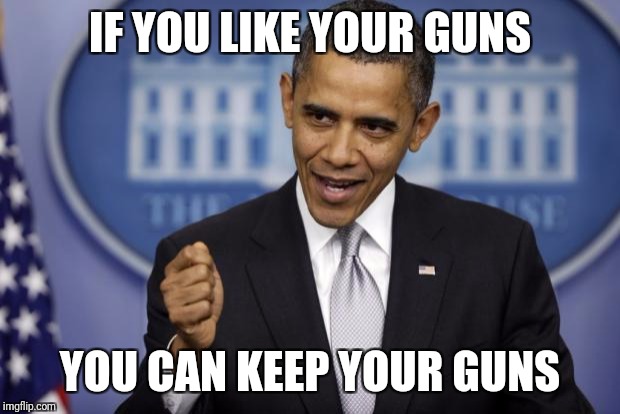 Period
Note: Me sharing a link and information published by others does not constitute my endorsement, agreement, disagreement, my opinion or publishing by me. If you do not like what is contained at a link I share, take it up with the author or publisher of the content.
Top

TheFriscoKid wrote: This forum would benefit - we would benefit - from having more liberals and democrats and anti-gun people come in and have respectful considerate discussions not with the expectation that either side will change the others mind but from the benefit of understanding the other side and then being able to create strategies and compromises that allow us to keep our guns and allow the majority of Americans to feel safe again.
.

I'll offer that I have, and I use the word carefully, "desperately" tried to have respectful, considerate discussions on a couple of social media sites over the past few days. I went far out of my way to be respectful, to never post anything that even vaguely looked confrontational and was a dismal failure at getting such a conversation going. The premise of one of the treads was adapting the Argyle ISD armed teacher program elsewhere. I admit that these are my summations of the responses that I got.
1. Those who resisted arming teachers mentally deny the existence of LTCs.
2. They will not feel safe ever with guns around them. I drew a parallel to snakes and they bought into it. Most would kill any snake that they see, never acknowledging that snakes are a part of nature, put here for a reason and fulfill their purpose. It wasn't hard to understand that they feel the same way about guns. There were a few in the conversation who admitted to owning guns, which I found odd.
3. No teacher ever could receive enough training to be trusted around children with a gun. Trying to make that point that some teachers have LTCs and could easily meet their students in Wal-Mart while armed got no discussion started. They ignored it. I finally got one of the Liberal posters to admit that a teacher trained in the same school shooting/active shooter modules that are included in the DPS trooper training could be considered. In a separate thread on this forum, I asked about LEO training on those topics and was showed a curriculum for basic officer training that included no modules like that. I didn't get to go back to bring that point up.

I'm pretty sure that an article on the American Thinker about the Liberal mindset was included on another thread on this forum. I read that article and it was pretty clear that my experience in honestly and forthrightly trying to start a conversation mirrored that article's analysis. I'm also an education activist and found the article points to be true when trying to start a rational conversation on education topics. I hold a permanent teaching certificate and have experience teaching in the public schools. As soon as I broached a view point the was contrary to the Liberal educators, I was dismissed as though I had taken up plumbing. My lack of recent educational experience disqualified me from being a part of their discussion. Actually, it was my asking questions about some of their cherished points that go me dismissed and they used recent classroom experience as the excuse.

I don't know the answer. I have a number of Liberal thinking friends and acquaintances. The ones whose relationships I've been able to continue and I have tacitly agreed not to discuss hot button topics. I doubt that, even under duress to do so, we could find common ground in those areas. Many of these people I've known for years and I've even worked with some. I'll submit that if gun topics cannot be discussed where a relationship exists to talk about other things, the chances of a stranger with a Liberal mindset existing on this forum for very long a very slim. Heck, sometimes we even eat our own.

TheFriscoKid wrote:I've spent $3000 on G&A since Valentine's day in anticipation of those changes.


I only spent $300 but one thousand rounds of green tip goes a long way.

I need to inventory but I think I have about ten 30 rounders per AR so I should be fine in the short term.
This is my opinion. There are many like it, but this one is mine.