True, but overly simplistic. What that means, with a virulent airborne pathogen, is that you have a 2-3 "portal" entry into your home, and a means of handling clothing worn on the outside.

You leave for work, not in a bug-suit, but masked. You come home. You step into the outer tent and get a vapor dispersion bath of (home recipe) 10% bleach. Wait about 3 minutes, and strip naked. Get bathed again, after placing your clothes in a sealed laundry bucket that's in the tent with you. wait. Step into the ante-chamber where you get a rinse. That's really basic, and unnecessary for most things, but really "iffy" for anything on the order of pneumonic plague.

So, yes, bleach solution is a great disinfectant, but every time someone infected with an airborne pathogen breathes, more vapor is expelled, needing decon.

If it isn't overly virulent, wiping down your doorknobs, places where bags & purses are dropped at the end of the day, and LOTS of hand washing is about as good as you'll get. Be sure to use a good hand cream, as dry, cracked skin is an entry for other infections.

Hahaha... yeah... count me as one of the folks who will just take his chances. The CDC is working hard on this one. I am expecting some kind of vaccine to come out. I also wonder if the deaths are mostly along the same lines of deaths from the flue. Older folks, young kids people with existing health issues. The "regular flue" has already killed more folks in the USA than that corona virus has.

The mortality rate should be highest for babies under 2, young people 21 to 45 and those over 71.
Top

Don't handle stuff you don't have to, especially in public places. Doorknobs, merchandise, etc. Always be mindful of what you're touching out there.

At ALL times in public, KEEP YOUR HANDS AWAY FROM YOUR FACE. The "gateway" for viruses entering your body is through your eyes, nose and mouth.

Any time you've been in public, walked through a public door, etc. wash your hands. Keep a little bottle of hand sanitizer in your car and use it every time you get in the car, before you touch anything.

Very good advice to ALWAYS USE! Especially in the bathroom, don’t touch the handle! Including the handle to the bathroom door! especially
"Jump in there sport, get it done and we'll all sing your praises." -Chas

The Chinese goverment is doing its job. Forget about transparency or truth. They need to save their nation.

This pathogen is very nasty one.

My new analysis, it can persistently survive outside its host. That is really really bad news

Hot off the Press:

China locked down 50 million people and has to keep them fed
Carrying permits demanding “fast passage,” truck drivers rushed a 560-ton shipment of disinfectant from eastern China to Wuhan, the locked-down city of 11 million people at the center of a vast effort to contain a new viral disease. Outside the metropolis in central China

US declares a national health emergency.

Delta stops flights to China till at least APRIL.
Top

I haven’t read through every page of this thread so I don’t know if it’s already been mentioned; but one of the problems I read about in and around Wuhan is that the Chinese gov’t and healthcare system doesn’t have enough test kits available to test everyone who is symptomatic. And large numbers aren’t even being admitted to hospitals because their bureaucracy is breaking down and can’t adequately address all of the new cases. Many of them are dying at home, still undiagnosed. Consequently, between the lack of test kits and the undiagnosed ill, there are people getting sick and/or dying whose illnesses and deaths aren’t even being reported into the database which tracks these stats. So even if they fully disclosed the numbers in their database, it wouldn’t even be close to an actual picture of the numbers.
Give me Liberty, or I'll get up and get it myself.—Hookalakah Meshobbab
I don't carry because of the odds, I carry because of the stakes.—The Annoyed Boy
My dream is to have lived my life so well that future generations of leftists will demand my name be removed from buildings.
Top

Also what happens with those infected and recovered or did not get sick. Would they be carrier of the virus for life?
Beiruty,
United we stand, dispersed we falter
2014: NRA Endowment lifetime member
Top

A problem with places with less than ideal hygiene.
Top 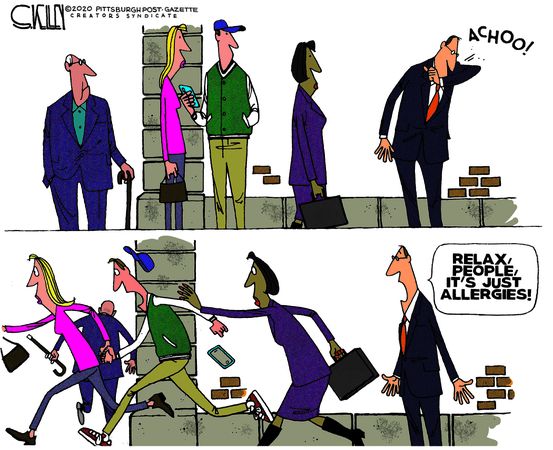 A problem with places with less than ideal hygiene.

Like San Fran
Distinguished author of opinions and pro bono self proclaimed internet lawyer providing expert advice on what you should do and believe on all matters of life.
Top

A problem with places with less than ideal hygiene.

Like certain big cities in California?
“Is there nothing to sing about to-day? Then borrow a song from tomorrow; sing of what is yet to be. Is this world dreary? Then think of the next.” - Charles Spurgeon
Top

I went grocery shopping at HMart today. Should I be worried?
We were out of kimchi and pureed garlic. Couldn't be avoided.
I'll stay in the house for 2 weeks.

We should know in the next week whether the disease is contained in the US.
Did the 9? known cases transmit the virus before being admitted for treatment and if so, to how many other people?
I am not a lawyer. This is NOT legal advice.!

https://www.who.int/emergencies/disease ... n-reports/
Diplomacy is the Art of Letting Someone Have Your Way
TSRA
Colt Gov't Model .380
Top
Post Reply
905 posts