There is seemingly no end to the extent to which anti-gun people and groups will lie about guns and gun owners. Post links to articles by these masters of prevarication here. 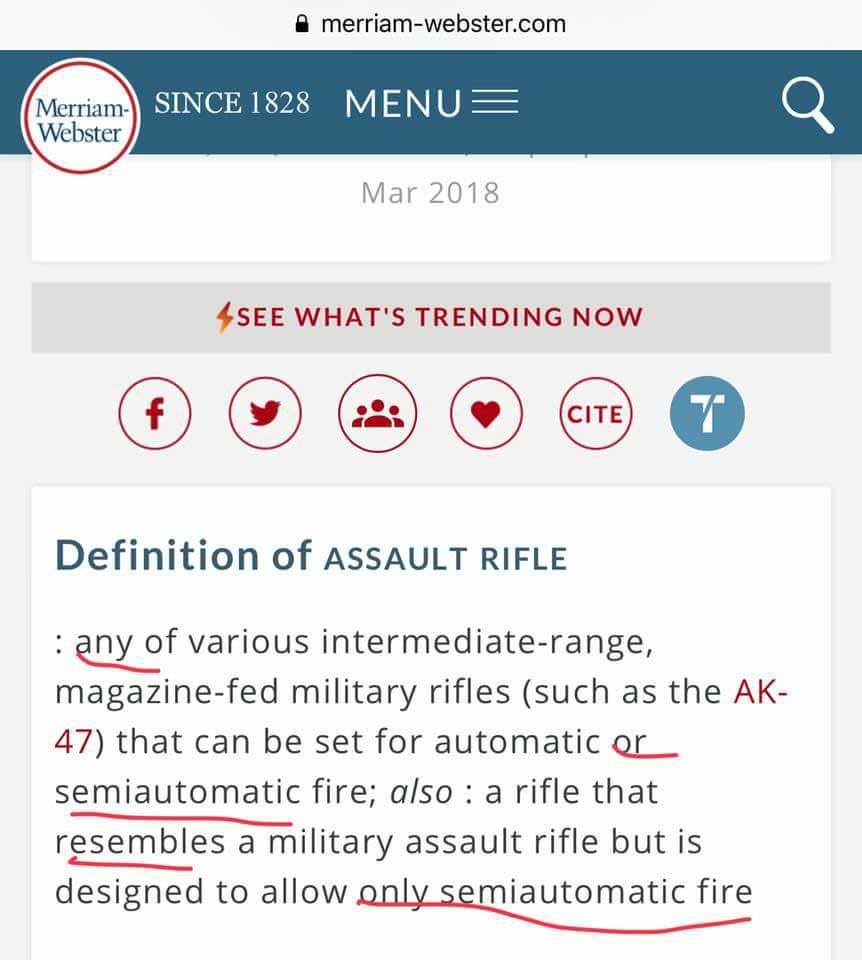 Millions of people across the country lift their gaze from their devices and ask, "What's a dictionary?"

I understand that you are all progressive socialists with an agenda to fulfill, so commenting gets me nothing but sneers in return.

The left lies about everything. Truth is a liberal value, and truth is a conservative value, but it has never been a left-wing value. People on the left say whatever advances their immediate agenda. Power is their moral lodestar; therefore, truth is always subservient to it. - Dennis Prager
Top

bblhd672 wrote:Millions of people across the country lift their gaze from their devices and ask, "What's a dictionary?"

I understand that you are all progressive socialists with an agenda to fulfill, so commenting gets me nothing but sneers in return.

So you mean if I draw a picture of a cow, it's not a cow? I mean, what if it is a really good picture and it looks just like a cow? Surely then it becomes a cow and is no longer just a picture.

Words have meaning. And the left feels free to redefine their meaning whenever they choose to do so. Net result = words no longer have meaning. "Racist" used to mean someone who harbored evil thoughts toward other races. Now it means someone who disagrees with the left on border security, or affirmative action. There are plenty of other examples.
Ding dong, the witch is dead
Top

1984
Note: Me sharing a link and information published by others does not constitute my endorsement, agreement, disagreement, my opinion or publishing by me. If you do not like what is contained at a link I share, take it up with the author or publisher of the content.
Top

Well, or it may be, in which case we're back to the point that the term has no useful meaning. We'll be regulating weapons based on their appearance instead of the danger they present. But this will be selective. None of these people would agree that, because a pineapple grenade vaguely resembles a pineapple, it should be regulated the same way.
www.amazon.com/author/kennethbennight
Top

I haven't checked Webster on this one. I didn't know whether to look up "bust a gut" or "assault hammer".

so just becasue something LOOKS like something else according to webster its the same? what if we took a dog thug and stuck it between 2 pieces of bread and called it a sandwich. Think they'd eat it? NO. because it's NOT food. its a dog thug! this is asinine...

a bunch of leftist idiots who run the world... idc what dictionaries say an AR-15 or ANY OTHER semi-automatic rifle is NOT a military fully automatic rifle... this is getting ridiculous.

Grundy1133 wrote:so just becasue something LOOKS like something else according to webster its the same? what if we took a dog thug and stuck it between 2 pieces of bread and called it a sandwich. Think they'd eat it? NO. because it's NOT food. its a dog thug! this is asinine...

a bunch of leftist idiots who run the world... idc what dictionaries say an AR-15 or ANY OTHER semi-automatic rifle is NOT a military fully automatic rifle... this is getting ridiculous.

I don't believe any dictionary claimed it is.

The thing is, common usage is what ultimately defines words in the English language. If enough people call a magazine a clip often enough then a clip becomes a synonym for magazine. If we want to get technical, every M16/M4 fully automatic rifle is an AR15. Its a military styled scary looking semiautomatic weapon. There is nothing to apologize for.
Liberty''s Blog
"Today, we need a nation of Minutemen, citizens who are not only prepared to take arms, but citizens who regard the preservation of freedom as the basic purpose of their daily life and who are willing to consciously work and sacrifice for that freedom." John F. Kennedy
Top

I sent them the following feedback message:

An assault rifle is generally defined as:
A) firing an intermediate power caliber (specifically NOT a high-powered caliber, which would make it more difficult to shoot)
B) having a select fire mechanism allowing the user to choose between “safe” and “automatic”, or “safe”, “semiautomatic”, and “automatic”; the common denominator is the ability to fire in fully automatic mode.

The official US Army definition of “assault rifle” is (https://en.m.wikipedia.org/wiki/Assault_rifle):

“In a strict definition, a firearm must have at least the following characteristics to be considered an assault rifle:

• It must be capable of selective fire.
• It must have an intermediate-power cartridge: more power than a pistol but less than a standard rifle or battle rifle, such as the 7.92×33mm Kurz, the 7.62x39mm and the 5.56x45mm NATO.
• Its ammunition must be supplied from a detachable box magazine.[5]
• It must have an effective range of at least 300 metres (330 yards).

“Rifles that meet most of these criteria, but not all, are technically not assault rifles, despite frequently being called such.

By changing the definition in your dictionary, you have inserted yourselves into the nation debate on firearms rights, but semiautomatic hunting and target rifles have been in use for well over 100 years. Your change of definition reclassifies millions of purely hunting rifles as “assault weapons”. It not only injects your organization into the debate, it calls into question the reliability of ANY word or phrase you define.

I respectfully request that you either include the above information in your definition to clarify it, or that you revert the definition to it’s previous state.

Give me Liberty, or I'll get up and get it myself.—Hookalakah Meshobbab
I don't carry because of the odds, I carry because of the stakes.—The Annoyed Boy
My dream is to have lived my life so well that future generations of leftists will demand my name be removed from buildings.
Top

They did the same thing with the meaning of fascist.
My guns won't be illegal, they'll be undocumented.

Not as eloquent as some but I sent this:

Your NEW definition of “assault rifle” is factually INCORRECT, both in it's description of technical attributes as well as it's appearance. I'm saddened by the change of a number of "definitions" that have been changed in recent history, to follow the political climate, not the actual change in an object. Gone are the days that we could trust a REFERENCE BOOK to be unbiased and accurate.

A perfect example of how ridiculous your assault rifle definition is , would be defining a Ford Fiesta as a Formula One race car because someone added "racing stripes" or mag wheels.... neither enhance it's performance or change it from being a tiny, slow economy car.

I never thought I would have to check multiple sources to get an accurate definition.

Return to “Anti-gun propaganda and other lies!”