If we didn't have idiots voting...
sent to you from my safe space in the hill country
Top

The results of the recent Houston and Harris County elections would be very different. I think it may be time to move.
I believe the basic political division in this country is not between liberals and conservatives but between those who believe that they should have a say in the personal lives of strangers and those who do not.
Top

Thanks to the left’s control of the House of Representatives and the news media, Americans will be kept in a fevered state throughout 2019 — with innumerable hearings, exposes, criminal investigations and possible indictments of those around the president and the president himself. Truth will not be the point. Defamation will. Anything that might muddy the president, no matter how spurious, no matter how thin the evidence, will be pursued with gusto. The media will drop “bombshell” after “bombshell.” If lives and careers are ruined, so much the better; no one should be associating with this president anyway, as far as the left is concerned. The Robert Mueller investigation into alleged “collusion” between the Trump campaign and the Russian government — which has led to guilty pleas and imprisonment of people around President Trump for offenses having nothing to do with such collusion — is a preview of what lies ahead.

The goal of the left to weaken, disable and impeach the president is the heart of its mission to undo the 2016 presidential election. If the Republicans had done anything comparable during the Obama administration, the Democrats and the media would not only have charged Republicans with racism — as they labeled all criticism of Barack Obama — they would have howled “fascism.” And, for once, they wouldn’t have been far from the truth. The misuse of government institutions for political ends is indeed a fascist tactic. But because most media serve as the propaganda arm of the Democratic Party, there will be no protest from the media, only support.

There is nothing Trump or any member of his administration has done that is comparable to Hillary Clinton’s use of her own email server while U.S. secretary of state, or her destroying tens of thousands of emails after they were subpoenaed by Congress, or foreign governments’ and corporations’ paying vast sums of money to Bill Clinton and The Clinton Foundation while Hillary Clinton was secretary of state. Nor is there anything Trump or anyone in his administration has done comparable to the Obama administration’s use of the IRS to suppress conservative nonprofits; its selling guns to Mexican drug cartels, at least one of which was later found at the scene where a Border Patrol officer was killed; or the lies it told about the cause of the murder of a U.S. ambassador and three other Americans in Benghazi. Yet any suggestion by Republicans that these activities be investigated is effectively shouted down by the Democrats and the media. And let’s not talk about the real collusion in 2016 — between the FBI, the State Department, the Clinton campaign and the Obama White House, using material sourced in part from the Russian government — to undermine the Republican candidate for president and his presidency. The mainstream media isn’t interested in that.

In other words, the Democratic Party and the media will do to American political life what it has done to the arts; the universities; the high schools; the Boy Scouts; race relations; religion; the happiness of so many women (misled by feminism regarding marriage and career); the moral fabric of American life (morality reduced to feelings); late-night television; mainstream Judaism, Catholicism and Protestantism; pro football; and the sexual innocence of the young: It will poison it.

From the French Revolution to this day, the two great aims of the left have been promising utopia to the malcontented and accumulating as much power as possible. All moral values are subservient to these goals. After all, what could be more important than “social justice” (the left’s term for everything it advocates); “equality” (of result); women’s liberation from the “sexist oppression” of the “patriarchy”; combatting “white privilege”; fighting the “rape culture” that pervades campuses; saving life on planet Earth from the “existential threat” to it; “resistance” to the “authoritarian,” “fascist,” “white supremacist,” “racist” Trump administration; supplanting national identities and institutions with a “world citizen” identity and international institutions; and undoing the most fundamental built-in identity of the human race, that of male and female, in the name of transgender rights?

Compared with almost any country, America is freer; gives its people more opportunities to economically advance; is less racist, xenophobic and anti-Semitic; has a friendlier population; has less corruption; and has far more medical innovation. Yet this coming year, the left, the Democratic Party and the media will continue purveying the lie that the Trump administration is fascist, racist and authoritarian and poses a mortal threat to American democracy. (Given all this Trumpian fascism, how exactly did the Republicans lose the House?)
Thanks to Democratic control of the House of Representatives, the left will use the levers of government to keep the American people in a constant state of agitation. The only thing the left hates more than a happy population is losing elections. And it knows the two are linked — because happy and grateful Americans rarely vote Democrat. The road to Democrat victories lies in convincing women, blacks, Hispanics, Jews and young people to be as unhappy, ungrateful and angry as possible — in the greatest country ever made.

https://www.dennisprager.com/the-left-w ... dark-year/
"You may all go to H3ll, and I will go to Texas." - Davy Crockett
"Fast is fine, but accuracy is everything." - Wyatt Earp
NRA Life Member
לעולם לא תשכח
Top

Trump putting out feelers in the event of a premature departure of RBG. RBG has now missed a few of days of oral arguments.

Trump visits border today in McAllen. Mexico discovered 20 or so bodies on its side. Apparently a drug gang shoot out.

Stock market has recovered a lot of what it lost at the end of the year. 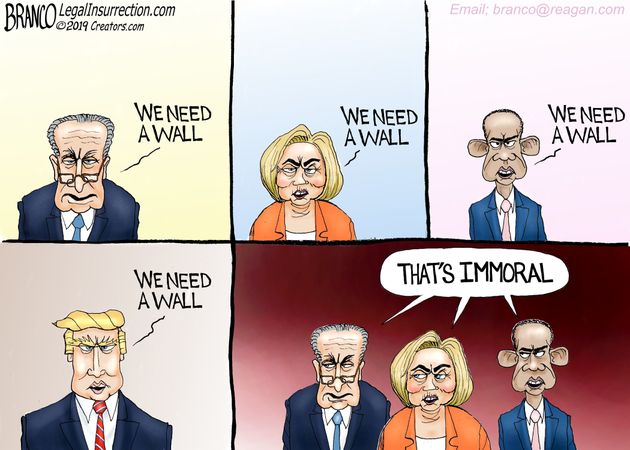 The left lies about everything. Truth is a liberal value, and truth is a conservative value, but it has never been a left-wing value. People on the left say whatever advances their immediate agenda. Power is their moral lodestar; therefore, truth is always subservient to it. - Dennis Prager
Top

FBI opened its own investigation of Trump after he fired Comey. They were concerned Trump was working for Russia.

Should the FBI now investigate itself for leading an attempted coup?
Top

FLASHBACK: DEMOCRATS BUILT TALL FENCE TO KEEP PROTESTERS OUT OF THEIR 2016 CONVENTION


The Democratic National Committee embraced the idea of border protection in 2016 — as long as that border was around the building housing its national convention.

Protesters against the Democratic Party’s nomination of Hillary Clinton were met with tall fencing around the perimeter of the Wells Fargo Center in Philadelphia during July 2016. The results of the recent Houston and Harris County elections would be very different. I think it may be time to move.

That's a good idea. Living in a large urban areas in Texas is lingchi. That's not going to change in our lifetimes without some cataclysmic event. I worry rural areas aren't far behind if state level politics continues on this path, but I'm not willing to give up that fight. However, sometimes I think I'm just kidding myself that Texans can stem the socialist tide in our state, vener mind national politics.
sent to you from my safe space in the hill country
Top

Trump feeds National Champion Clemson team fast food from his own pocket due to government shutdown. Trump is a Big Mac fan like me.
Top
Post Reply
4140 posts